What’s so special about an annular solar eclipse? Unlike a total eclipse—where the Sun is eventually blocked out entirely by the moon—with an annular eclipse the moon appears slightly smaller and never fully covers the Sun, even when the two are completely aligned. Such an event usually occurs with striking visual effect: in the moment of perfect alignment the Sun looks like a glowing golden ring with a hollowed-out core. 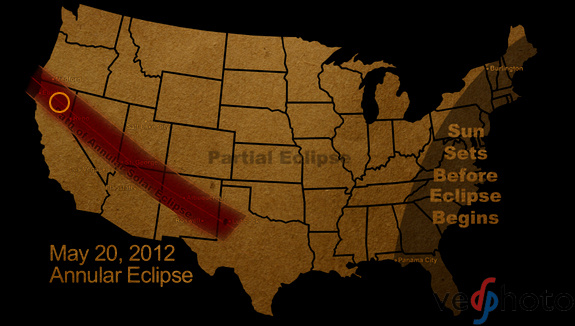 On May 20th, 2012, Ved and the HiMARC team set out for Lassen Peak in Northern California where they knew the path of the eclipse would run. By setting up their telescopic equipment on this location they could assure that their images of the event would turn out like few others’—only along this path would the solar ring surrounding the moon appear with equal thickness.

To capture the perfect image, Ved used a hydrogen-alpha bandpass filter, through  which the details of the swirling hydrogen surface of the Sun is most visible. And for each phase of the eclipse, nine different shots were made with varying levels of exposure. By doing this, he could then digitally process the nine photographs, ultimately creating a single high dynamic range composite image.

You can see photographs from the HiMARC team's trip to Mt. Lassen below, as well as additional high dynamic range images of the eclipse.