This past week we constructed and tested an Arducopter Quadcopter platform for aerial imaging tests of HiMARC's Fluid Lensing on underwater targets. Ultimately, we hope to image coral reefs through the water's surface as part of the Reactive Reefs project.

This technology may help marine biologists study the bleaching effects of coral without having to dive down into the water. The people working on this project are Trent Lukazyk, who is engineering and flying the Quadcopter, and myself, Leo Kheyn-Kheyfets, who is helping with the engineering, photography and documentation of the Quadcopter systems as well as the HiMARC and Reactive Reefs teams.

Starting the run at 9:17 a.m., we were able to fly the Quadcopter in several modes till the battery got to low at 9:35 a.m. and we were not able to get it off the ground anymore.

Going through the data log of the first full test, we found that during the 17 minute run, the battery power started at 12.3 V and ended at an 8.6 V where we were no longer able to lift it off the ground. After the battery voltage got down to 10 V, the battery started dying very quickly and got down to 8.6 V in a a matter of seconds. When the Quadcopter is just loiter, it is drawing 15 Amps, but during the maneuvers, it draws up to around 18 Amps.

The Stabilization mode was used to take off, and works by trying to maintain a level aircraft. The Loiter Modeis used to hold the Quadcopter in all x,y, and z directions, and then returns to a set point position. While the Altitude mode works at keeping the Quadcopter at the same altitude and only moving the Quadcopter in the xy plane, and the throttle then changes the altitude.

Here are some logs produced from the first full run:

Some photos from the construction and testing: 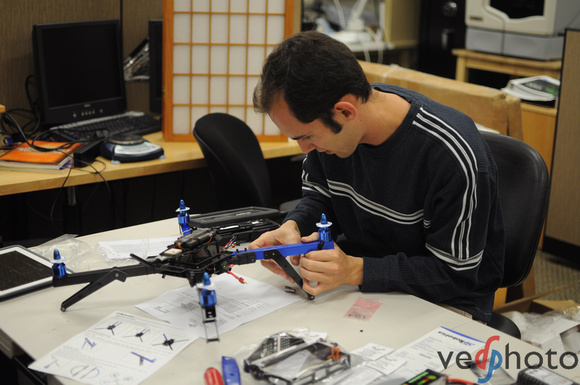