The main issues impeding our timelapse photography were the battery life of the camera equipment and the restrictions of the macro lens' field of view and depth of field. Here was our eventual device: 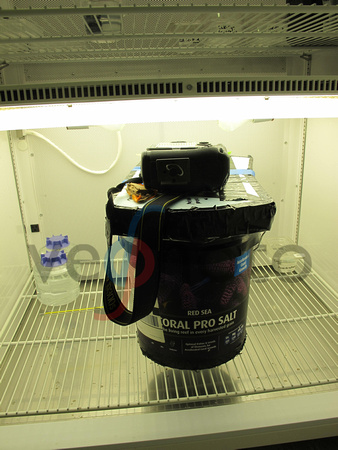 It was the fourth iteration in a long series of trial-and-error creations...

Our first setup was intended to inform us about the anemone's movement and the length of time it would take for it to bleach fully. After placing an anemone in the incubator at 34 degrees C for three hours to stress it and trigger the bleaching process, we moved it to a petri dish outside the incubator and under our cameras.

A D7000 on a tripod and three flashes (one commander, two slaves) captured a photo once every two minutes, and a Canon camcorder took video. The setup was in a dark room, though the anemone was lit continuously by a blacklight so it would be visible in the video. 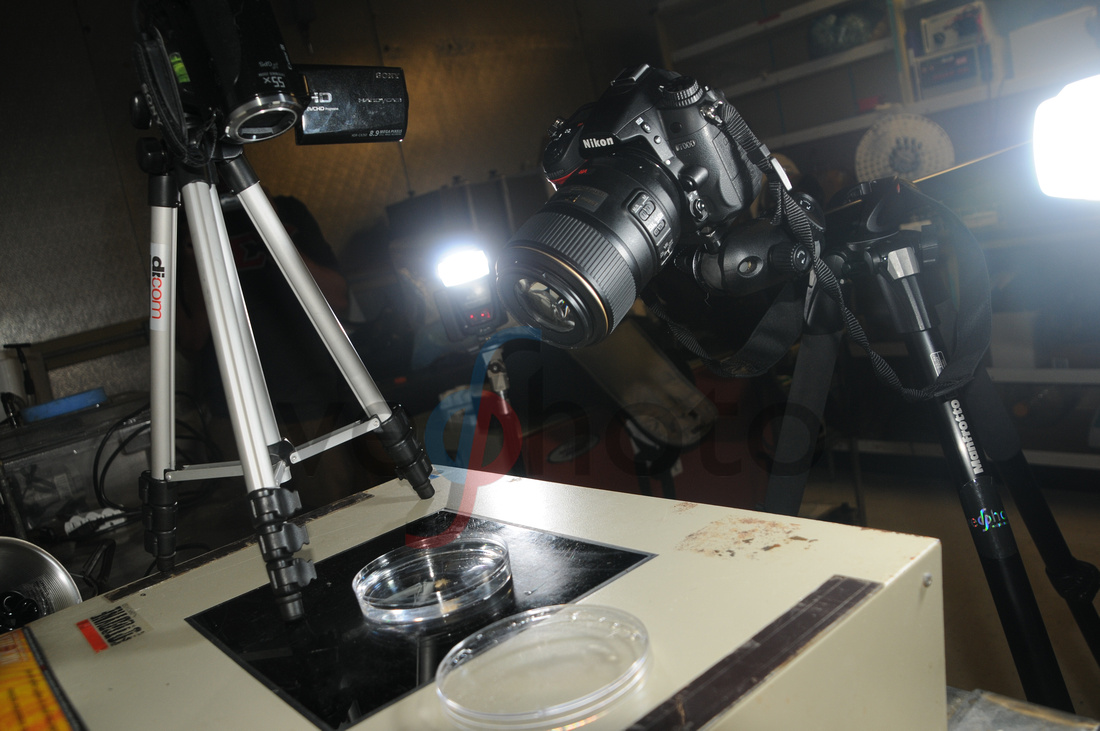 The first setup ended up informing us about more than just the anemone – we also realized how impractical our setup was. The type of Aiptasia that we used would take a week to bleach fully outside of the incubator, and the size of the petri dish meant that the surprisingly mobile polyp escaped the camera's view within a couple of hours. Oops.

Our second attempt featured a smaller petri dish and a camera positioned directly above the dish to minimize distortion and keep the anemone in a single focal plane. We also simplified the lighting by placing the petri dish in a black tank with a single flash. The photo quality increased, but again the battery lives of the equipment could not outlast the bleaching process. Our results were 152 pristine macro photos... and then 450 pitch-black photos when the flash inside the tank ran out of battery. 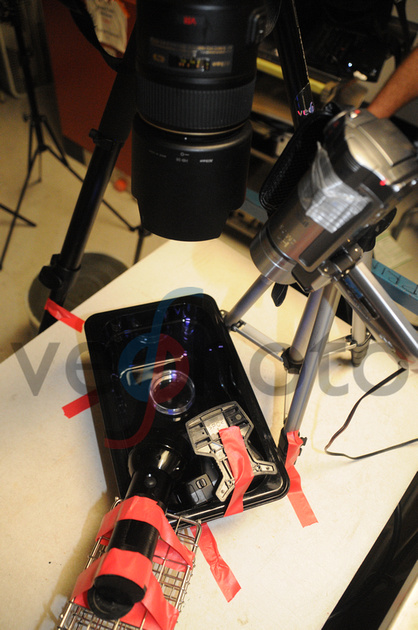 The second setup, with only 1 flash lighting the anemone and the camera positioned at the zenith of the dish

Third setup: we went in a different direction to circumvent the flashes' battery lives. I decided to make a system that would fit inside of the 34C incubator, shortening the bleaching process to two or three days. Enter the “Nikon iTripod 2000” and a black bucket: 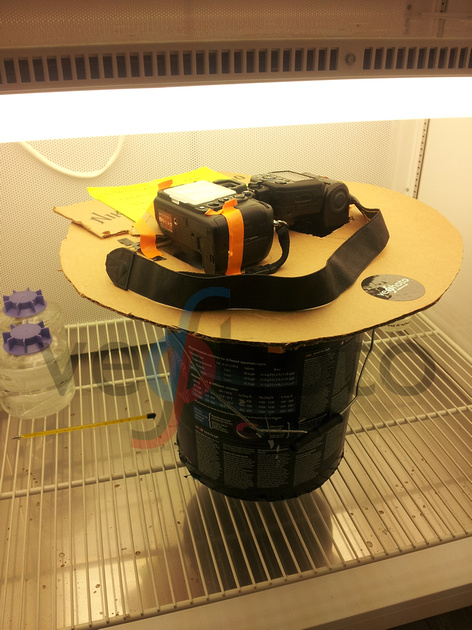 Two anemones confined in a spot plate, the same single-flash setup, and a cardboard DIY solution that fit perfectly in the lower shelf of the incubator. Success was tantalizingly close... alas, the next morning I discovered that one of the batteries in the slave flash had begun to leak, leading to the familiar “200 perfect photos, 400 pitch-black photos” result. Also, the cardboard ended up sagging under the camera's weight, causing the frame and the focus to drift from the anemones. The picture quality was great, though: 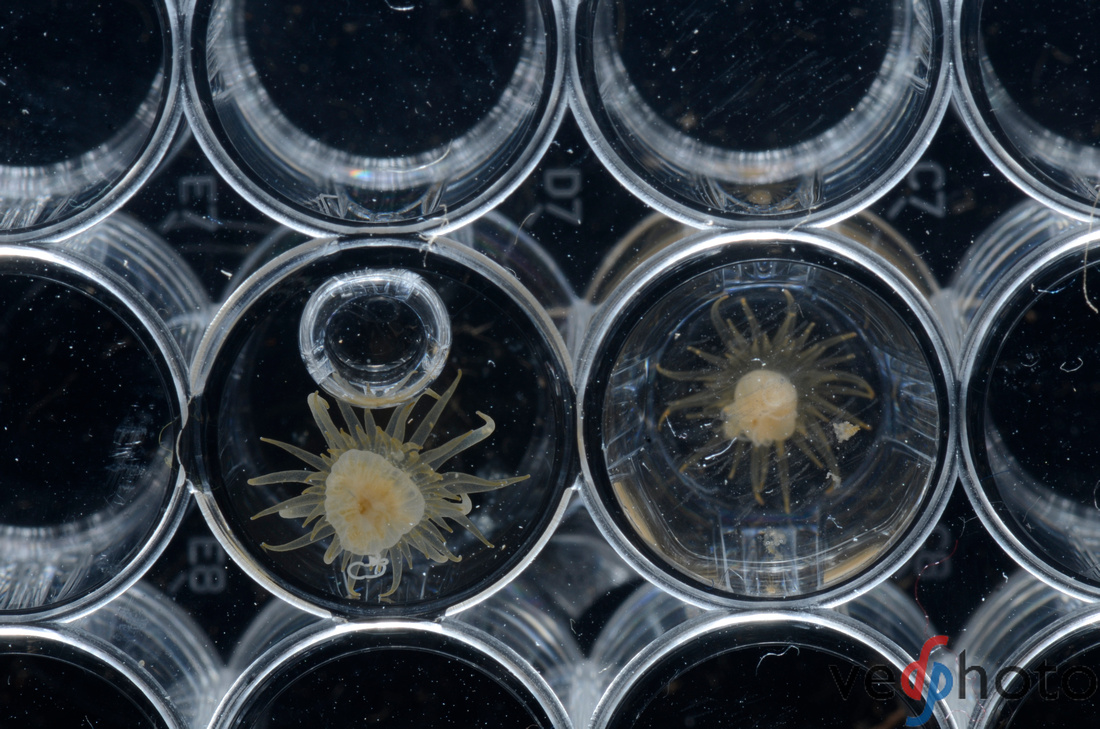 Fourth time's the charm, right? The “Nikon iTripod 3000” featured an innovative foam structure that supported my D300s, battery grip, and SB900 without complaint; it retained the same black bucket body and single-flash setup. We christened it the “Vedphoto Hydrophotography Solution,” or “VHS,” due to its similarity to a large blue VHS tape. Corinn and I slid it into the incubator with a prayer and a fond farewell. 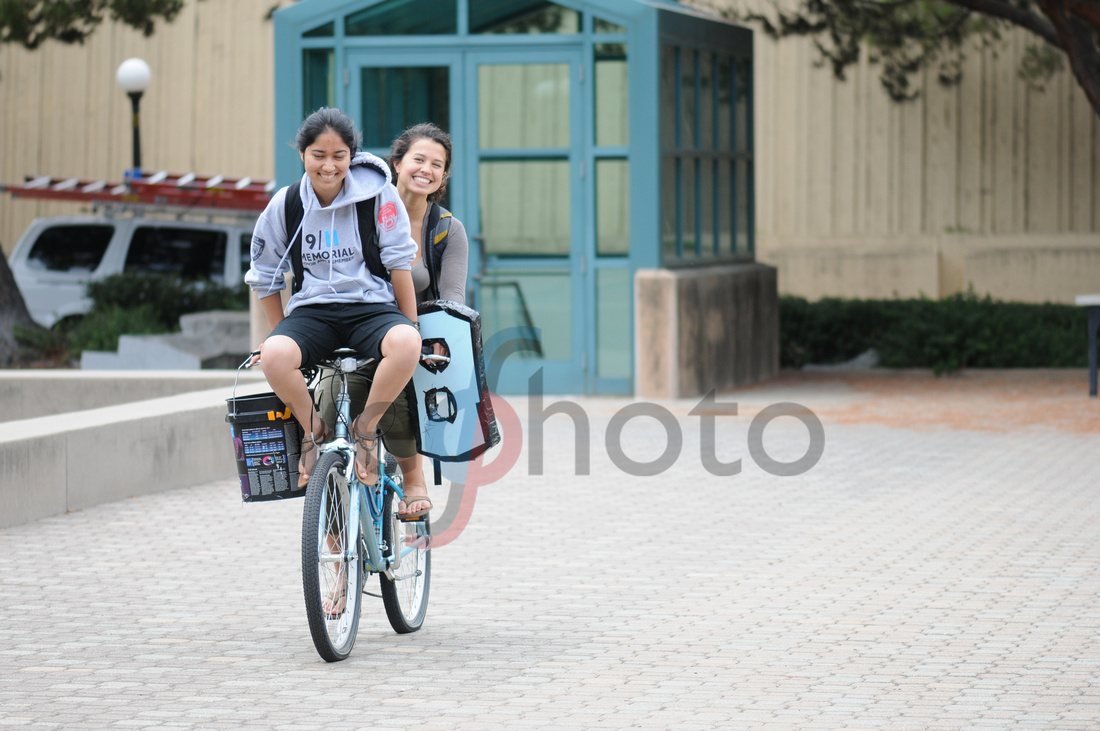 Two people, three cameras, two tripods, foam, and a bucket... on one bike. 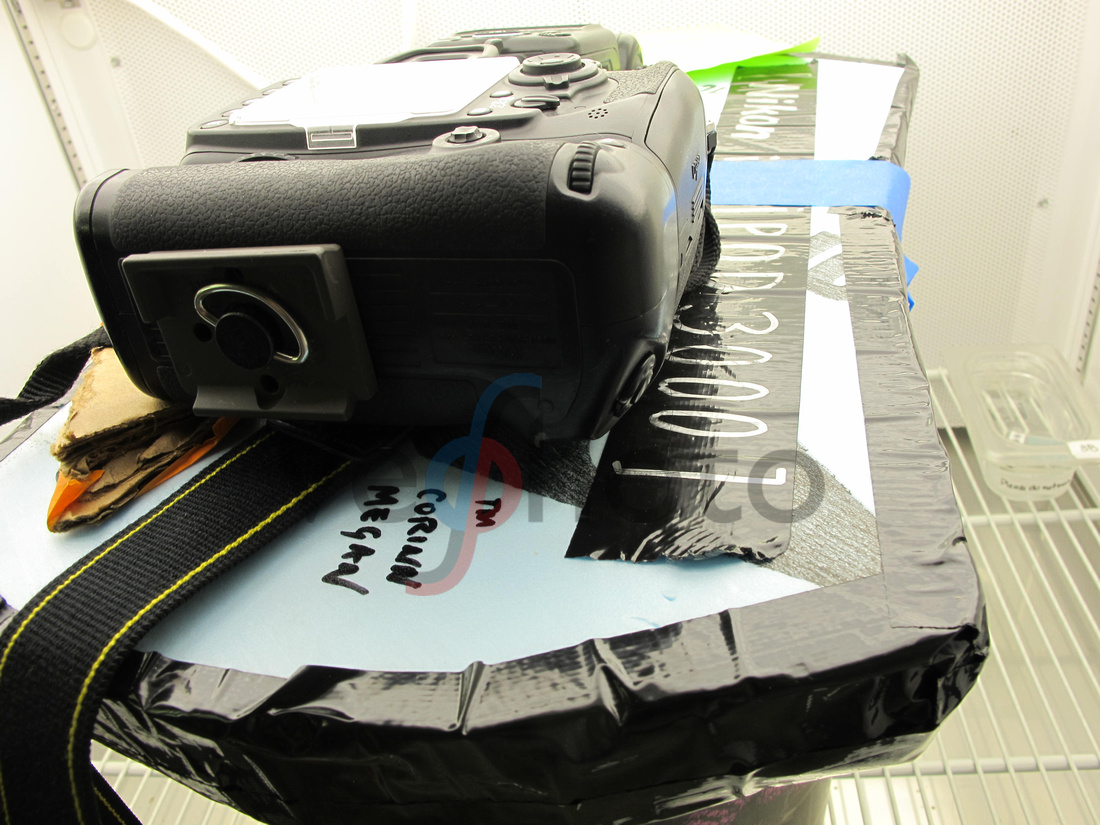 The iTripod 3000 featured duct-tape-reinforced edges and a body sculpted from a single piece of blue foam.

We ran in every 8 hours to put in fresh batteries and realign the camera. After nearly a week and a half of refining our timing -- Success! We produced the video at the top of this blog post, a compilation of a photo every minute for nearly 48 hours.