Physics In Vogue is a photography exhibition that aims to shed light on profound contemporary physics discoveries by combining fashion photography, laboratory grade optical effects and scientific accuracy to create visual representations of complex science. Each exhibition piece features authentic imagery captured and uses real physical phenomena and techniques in place of computer generated graphics. Over the course of 2011-2014 I will photograph Nobel Laureates, science outreach celebrities and scientists to bring into focus ten astonishing physical phenomena, missions and projects along with their discoverers and founders. The exhibition features ten life-size, large-format framed prints and will be on display at Stanford University and a number of Science Centers around the country. This project merges my knowledge of modern physics and editorial photography to visualize advanced contemporary science concepts through the photographic medium. My primary objective is to use my abilities as a photographer to share some of the most extraordinary physical phenomena and theoretical wonders of the natural world with the general public in an accessible and captivating way.

This project is supported by the 2011 Stanford University Angel Grant and SiCA Spark! Grant.

No other funding was received for this science outreach exhibition.

The second installation of Physics In Vogue, Space Vikings, is complete! Check out the results and see videos of the process in the Space Vikings Gallery.

NASA Ames Research Center leads the charge in small satellite innovation and development while evoking the Viking spirit of exploration and adventure. NASA Ames Center Director Dr. Simon P. Worden poses alongside the Vikings of Bjornstad for this photograph to personify that spirit and highlight NASA leadership in the modern space age. The next generation of small satellites, known as CubeSats, float above and herald a new era in space exploration and science. These CubeSats can be launched into Low Earth Orbit at a fraction of the cost of traditional systems, allowing more frequent, and more accessible scientific missions. My PhD research project, HiMARC, is based on this platform.

I am happy to announce that after imaging the Venus transit and Cygnus constellation with HiMARC technology and Dr. Natalie Batalha and the Kepler Spacecraft model in the studio, the first exhibition piece for Physics In Vogue, Discoverer of Worlds, is ready! The image below features NASA's Kepler Space Telescope Mission and its method for discovering extra-solar planets by photometric transit detection.

I was inspired to feature the Kepler Mission as Physics In Vogue's first piece as I know firsthand just how difficult it is to do this kind of science and thanks to a once-in-a-lifetime opportunity to image the Venus transit. It takes painstaking dedication, brilliant minds and years of precision analysis to accomplish what the Kepler team has in so short a time. You can learn about the technology I developed behind the imagery on the HiMARC page.  Check out the Get Involved page to learn how you can be a part of the extra-solar planet discovery process. Here is a color-coded breakdown of the components in Discoverer of Worlds  (see map on right): The Kepler Space Telescope is NASA's first mission capable of finding Earth-size planets around other worlds. The real spacecraft would not fit in my studio and is currently in a heliocentric orbit, so I brought in the hand-built model and overlaid it with solar cell scraps for a look like the genuine spacecraft. Discovering a planet with the transit method is a particularly low-reward science as only about 5% of star systems are in such a favorable alignment so as to have transits. To contend with this, the Kepler Space Telescope stares at an area of the sky in the Cygnus Constellation to avoid the Sun, point out of the ecliptic plane and include a large number of stars in the field of view. I captured this background of the Cygnus constellation by combining more than 8-hrs of exposure time at Humboldt State Park and used my HiMARC algorithms for processing. A bear nearly ate my dog in the process, but it turns out he was more interested in the berries. Red clouds of ionized Hydrogen gas form the emission nebulas, including the North American nebula (flipped for composition) while the Milky Way's dust lanes and stars dominate the frame. On June 5th 2012, among the rarest of predictable astrological events occurred as the planet Venus’ normal orbit brought it to pass between the Earth and the Sun.  Kepler relies on such transits to occur light-years away and though unable to view the exoplanet directly, infers its presence by a tiny dip in the amount of light coming from its hosts star. Repeat transits are needed to insure it was not a giant space bug flying in front of the lens (among other things). This year astronomers were lucky to see the transit only eight years after the previous occurrence in 2004, but the world will have to wait until 2117 to see Venus pass before the Sun again. For me and the rest of the HiMARC team, the transit provided a great opportunity to test our Atmospheric Lensing technology using a narrowband (7 nm) etalon interferometer tuned to the hydrogen alpha emission line on a 90mm refractor (this means we were able to filter out most of the light spectrum and only photograph a narrow portion in which hydrogen emits light. This allows you to see the rich textures of hydrogen on the Sun’s surface that would otherwise be obscured.) Solar features including filaments, flares, sunspots and prominences are visible. More than 1 Terabyte of data were recorded to produce this unprecedented high-resolution result! Dr. Natalie Batalha, Co-investigator on the Kepler Mission and Professor of Physics & Astronomy at San Jose State University, unassumingly brings the Vogue element to the piece and poses in the studio as I explain she should be reaching for the next new world with her right hand. As a member of the Kepler team, Dr. Batalha is responsible for the selection of the more than 150,000 stars the spacecraft monitors and works closely with team members at Ames to identify viable planet candidates from Kepler photometry.

Final assembly, color, contrast and brightness adjustments made in Photoshop, nothing else. 48'' x 120'' framed canvas print. See more about how this piece was made on my blog.

Each photograph in this project creates an intuitive illustration of an underlying physics concept, theory or technique. However, as science matures, so too does the theoretical background necessary to interpret it in a meaningful way. The magnificence of modern science is often shrouded behind a realm of mathematical hieroglyphs and impenetrable scientific jargon while the most significant results can be at once subtle, yet profound. Unlike the vast majority of current artistic renderings that rely on computer graphics simulations to visualize these challenging concepts, I use physical realism and scientific accuracy to match my values as a scientist. I do not rely on computer graphic simulations to augment my photographs; instead I draw on my background in laser optics, photonics and astrophysics to create real physical effects for the purpose of concept visualization.

In the gallery below and in the blog, you can see the latest conceptual photo shoots, keep up-to-date on project status and find information on exhibitions open to the public. Below, you can find ideas for upcoming pieces. 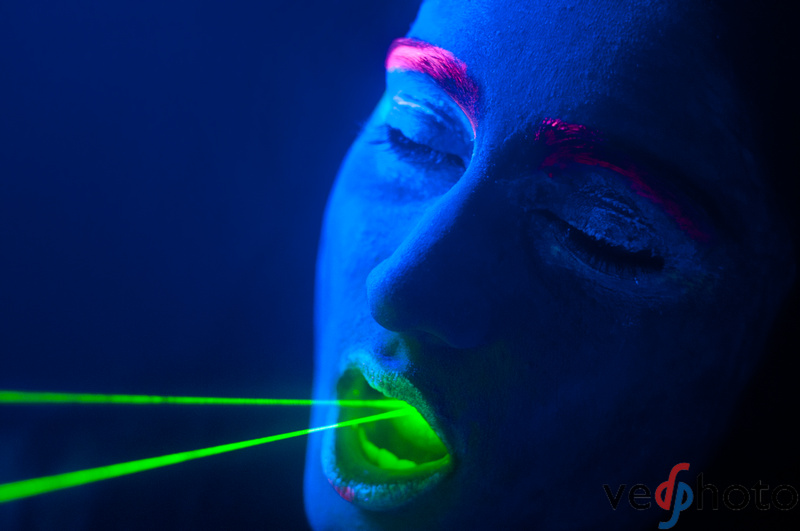