Terrafirmament offers a perspective of our solar system, life and perceptions of temporal and spacial scale. For this photography exhibition, I pioneered new imaging technologies to capture unprecedented high-resolution views of celestial events over the past year and the tallest organisms on Earth, Sequoia sempevirens (Coastal Redwoods) of Northern California. 2012 indelibly marked our generation as heavenly bodies forged their orbits in the sky, blocking out the Sun and staging a spectacular performance for our planet.  An exceptional Supermoon event illuminated a summer night and served as a prelude to the Full Solar Annular Eclipse over North America less than a fortnight later. The grand finale of celestial crossings, the Venus Transit over the Sun, ended the performance as it transfixed the collective human gaze just as it had hundreds of years prior when astronomers used such transit events to determine, to their surprise, the enormity of our solar system. Observing the transit firsthand and seeing Earth’s closest analogue, Venus, appear as a pin-prick over an immense Sun abruptly silenced my world and forced me to reset my cosmological mind-set. I sought to convey that experience and magnitude to others by photographing the largest organisms on Earth, Sequoia sempervirens, using 360-degree gigapixel panoramas and mathematical projections to create images thousands of megapixels in size from impossible vantage points. Beyond spacial scale, these organisms impress in temporal longevity more common among astronomical events, living for up to 2200 years and growing to heights of 380 ft. As a physicist and photographer, the events of the past year humbled me. I saw silent planetary processions swallow the Sun and engulf an Earth-sized world above an enchanted forest of living giants. The physical laws and biological prowess on display were stirring and formidable. I hope my photographs serve as a reminder of the fragility of our planet and the scale of our existence.

I use cutting-edge photography to channel people’s scientific curiosity, produce scientifically relevant exhibitions and fund award-winning research. Purchasing my prints and products enables this mission and helps me bring science to the public. Log on to vedphoto.com to learn more about my work and to purchase artwork. This exhibition and my PhD research are funded by people like you! Thank you!

As a photographer and a physicist, I aim to share my fascination with the nature of light through the photographic medium. My work features diverse facets of the visual world, including the discovery of an extrasolar planet in high school with amateur equipment, Vogue fashion shoots in Moscow, tsingy and bats in Madagascar and celestial phenomena. I completed my undergraduate degree in Astrophysics at Moscow State University and Stanford’s Physics Department. Currently, I am a graduate student in Aeronautics & Astronautics at Stanford.

This exhibition is dedicated to Andrew, for whom I would make Venus transit the Moon. 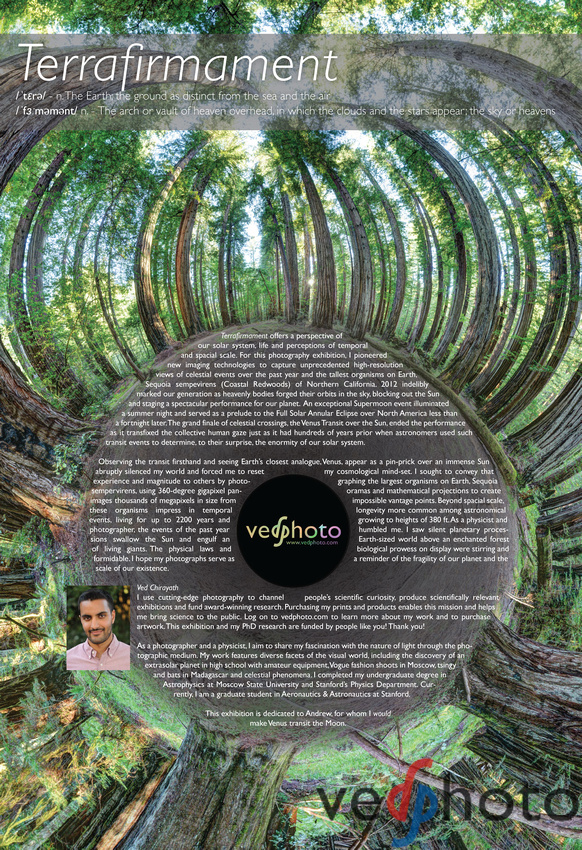